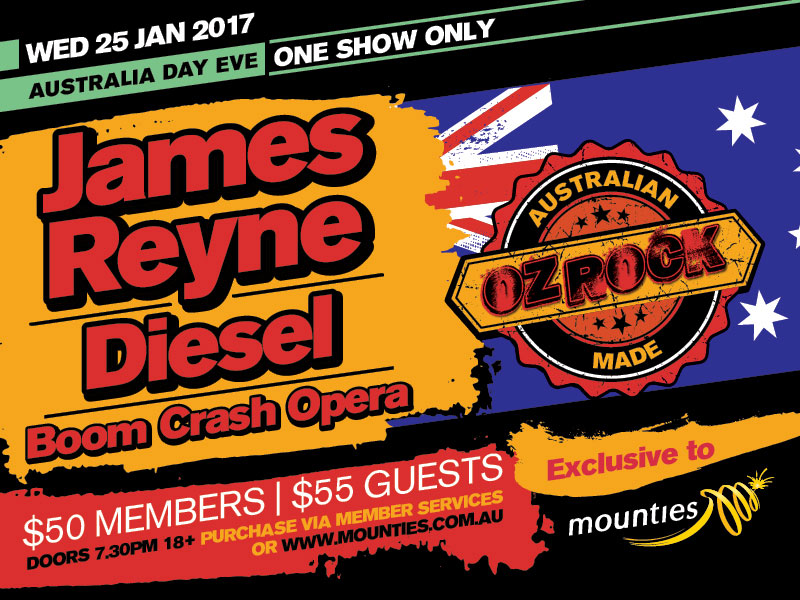 Mounties is bringing a collection of iconic Australian rock performers to the stage, for one night only!

Members and guests will be able to kick off their Australia Day celebrations early with the Australian Made Oz Rock Concert on Wednesday, 25 January 2017.

Patrons will be singing along to classic rock music including the smash hit ‘The Boys Light Up’ by James Reyne, Boom Crash Opera’s popular ‘Dancing in the Storm’ and Diesel’s hit singles ‘Love Junk’ and ‘Cry in Shame’.

James Reyne OAM, a popular artist on the Australian rock scene for over four decades, has sold more than two million albums and written some of the most memorable Australian songs of all time. The former lead singer of Australian Crawl, also received an Order of Australia in 2014.

Mark Denis Lioztte, better known as Diesel, is a US-born singer-songwriter and guitarist who grew up in Australia. Over the years, the ARIA winner has spent his career touring the world, and collaborating with other artists such as Jimmy Barnes.

Boom Crash Opera, a five-piece pop rock band who formed in Victoria in the mid 1980’s, hit the ground running with their debut single ‘Great Wall’ which was released in 1986, followed by their first album in 1987. Since then, they have produced three top 10 albums and a string of catchy
tunes, which make them a popular live act today.

Kevin Ingram, Mounties Group President, said: "This one time only event is a great way for everyone to go back in time and relive their youth, experiencing what 1980’s rock was all about. We encourage everyone to get their tickets early, because this exclusive show at Mounties is sure
to be a sell-out."

Doors open at 7.30pm and tickets can be purchased from the Mounties Box Office or online.